I ate artichokes growing up in rural America…and I liked it.

Artichokes are not the most popular food for kids. Perhaps it’s because they are not available or parents simply do not know how to prepare them. And then there’s the whole bitter thing going on which is definitely unpopular with kids and adults alike. Fortunately, my mother knew how to cook those giant globe artichokes…and she knew we would devour them if there was plenty of mayonnaise nearby so we could dip those leaf tips into it and scrape off the edible flesh. She was right!

Years later, I moved to California – the artichoke capital of America. But there was really only one variety grown, which was quite tasty. It was in California where I realized there were other ways to enjoy this vegetable. I ate deep-fried artichokes – similar to the famous Roman style (Carciofi alla giudia, an old Jewish recipe still popular in Rome), braised artichokes and roasted artichoke hearts. My eyes were finally opened to the wonders of the artichoke.

When I arrived in Europe to cook professionally, I was pleased to discover the many different varieties of artichokes found mostly in Italy and France. Suddenly, I had access to artichokes – lots of them – from December to May.

Artichokes are native to the Mediterranean part of Europe. It is actually a thistle, which can bloom into beautiful purple flowers. The exact origin is unknown, but it is common knowledge they have been cultivated in Italy for 2,000 years and played an important role in the diets of the ancient Greeks and Romans.

Fun Fact: Artichokes have a unique organic acid called Cynarin. This acid can affect the sweetness receptors in taste buds and once washed away in the mouth with a bit of food or a drink, the sweet receptors suddenly become hyperactive for a few seconds. This brief period of sweet receptor sensitivity causes anything you put into your mouth to taste overly sweet.

Season: Artichokes produce two crops per year, the first beginning in the winter and lasting throughout most of the Spring months and then again in the late summer. The first harvest during late winter or early spring is always the best in Europe. Most Southern Hemisphere artichokes are limited to the globe variety and become available during the spring.

Selecting and Storing: A good quality artichoke can be tricky to buy. The leaf formation should be very tight on fresh artichokes. Loose leaf formation is a sure sign of age and diminished quality. Carefully check the color – brown spots are often a sure sign of an older artichoke – probably one that spent too much time in storage. The stem end of an artichoke should not be wilted in any way; a clear indication of age and excessive time in storage. The bottom of the artichoke should remain firm to the touch. Avoid artichokes with soft spots anywhere around the heart or stem end. Frost damage can occur during the early spring months – this will cause discoloration of the leaves, but it won’t affect the flavor.

Fresh artichokes can be refrigerated for 2-3 days. Be sure to leave them uncovered to avoid excessive humidity and potential development of mold. As a general rule, I recommend preparing artichokes as soon as possible after buying at a supermarket or farmer’s market.

Preparing and Cooking: Artichokes can be steamed, boiled, stuffed, baked and even enjoyed raw. Preparing artichokes is not difficult in most cases. Slice off the top 1- to 2-cm (1/2 to 1-inch) of the artichoke using a serrated knife. Trim away the outer 2 or 3 layers of leaves and discard. Trim any part of the stem to leave about 2-cm (1-inch). Don’t throw away the remaining stem. Trim away the outer part of the stem to reveal the internal white core – I call this the artichoke marrow. Boil or steam the marrow with the artichoke. Boil artichokes in a large pot with plenty of simmering salted water. I cover the pot and begin checking the artichokes after 20 minutes. A knife tip should easily be inserted into the bottom of the artichoke when it is done. Continue simmering up to another 20-30 minutes if you are cooking large artichokes.

Follow the instructions in this handy guide for preparing artichokes that will be baked or stuffed: How to Prepare an Artichoke 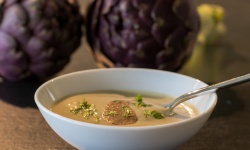 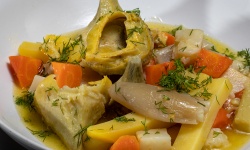 1 1
Go back to ingredients
x Thank you for your comment. It will be published after review by the editor.