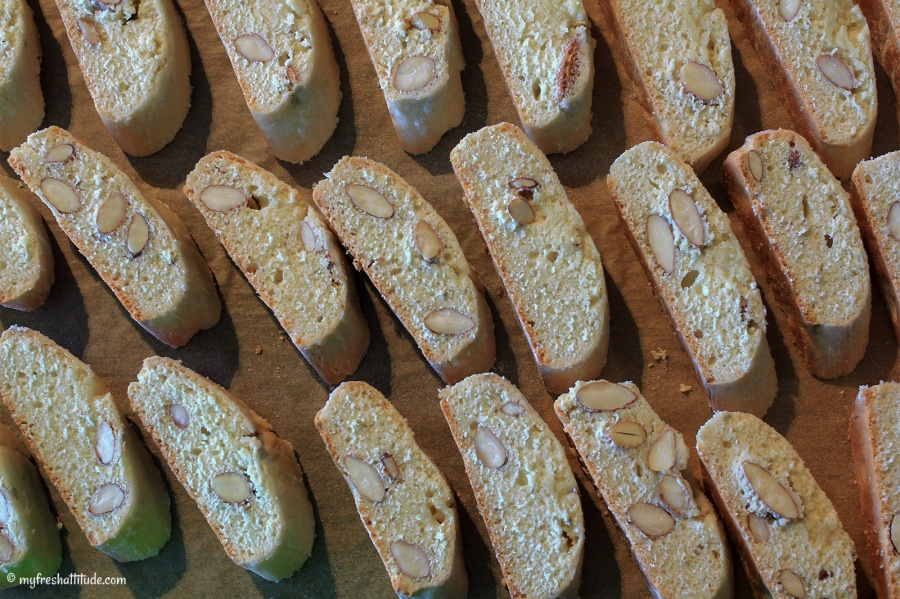 It’s time I make a public disclosure…I have a bit of thing with Italian cookies!

My passion probably began during my time living in Alba while studying Italian cooking…and working in some of the top restaurants in Northern Italy during the late 1990’s. I had the opportunity to learn some fascinating recipes, and I certainly enjoyed visiting as many village bakeries as possible to try out local specialties. And now, it is time to convert much of what I learned to plant-based versions!

Cantucci, otherwise widely known as biscotti, are common Tuscan cookies that are normally served at the end of a meal with a small glass of Vin Santo.  As per The Florentine, “During the Roman Empire, biscotti—from the latin ‘bis’, meaning twice, and ‘coctum’, meaning baked—were created to sustain the Roman League soldiers during long marches into battle. The unleavened wafers, flavored with almonds which at the time were plentiful, were baked once to cook them and again to completely draw out the moisture, resulting in a hard, dry texture and a shelf-life so long that the philosopher Pliny the Elder once reportedly boasted that they would be edible for centuries. When the Roman Empire collapsed, the cookies disappeared until the Renaissance.” (See the entire article here).

And, just in case you wondered, Cantuccio (plural is Cantucci) means a small bread-like biscuit from Tuscany. Whatever you call them, just make sure to avoid making them too sweet or too hard – they should have a nice crunchy outside and a semi-soft interior! Yield: Makes about 24-32 little biscuits.

Most of our content is available Ad-Free with a monthly or annual subscription. Interested? Give us a try – register for an annual subscription and receive a 3-day trial period, or simply sign-up for our monthly plan and take your time to go through our information!

We use cookies to offer you a better browsing experience, analyze site traffic, and personalize content.Accept CookiesRead more