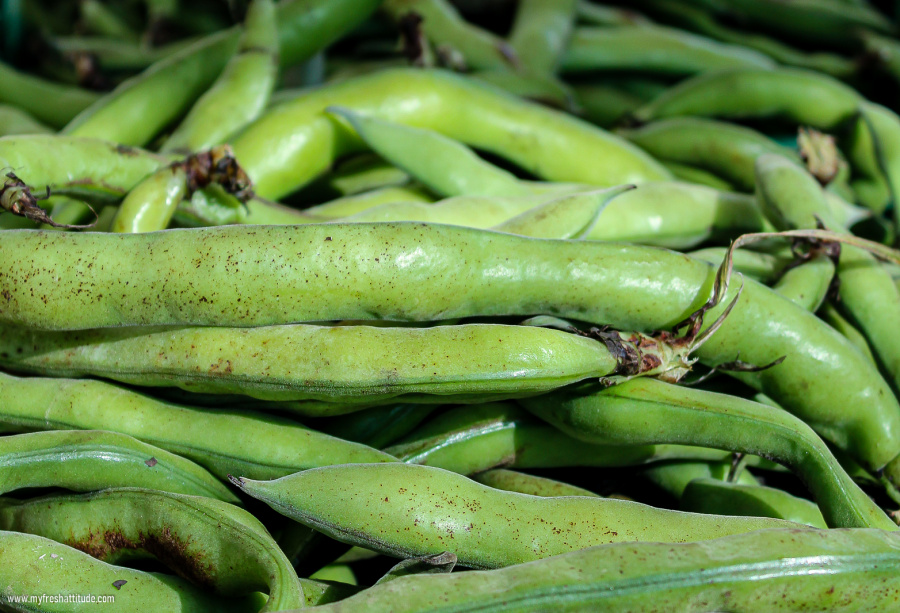 Prior to the influx of new world vegetables, broad beans were the only legume consumed in Europe. Today, fresh broad beans are mostly enjoyed throughout Italy, Morocco and Egypt…but they are making a bit of a comeback, so jump on them when you see them in your supermarket or local farmer’s market.

Fresh broad beans (also known as fave beans) can be intimidating to those who are not totally familiar with them. The pods and beans look like overly mature swollen peas. Young, or slightly immature, beans can be eaten without peeling off the outer shell of the bean. Most beans, however, require a double peeling – once to remove the beans from the pod and second time to remove the outer shell from the bright green tasty bit hidden inside the bean. It’s time-consuming work and the yield from a large quantity of fave pods yields a disappointing amount.

But despite this non-approachable characteristic requiring labor-intensive work, broad beans continue to be one of the Mediterranean region’s most popular vegetables…as well as the spring darling of many trendy chefs…as long as they aren’t the ones doing the actual preparation that is.

Broad beans are especially popular around Easter or Passover in Italy. They are often enjoyed a bit like edamame or combined with shelled sweet peas and risotto.

Dried broad beans are available almost everywhere. They remain an important source of protein throughout the year in many cultures.

Season: Fresh broad beans are available from late spring until early summer. Late season broad beans tend to be much starchier than the ones found earlier – they will require a double-peeling.

Selecting and Storing: Look for large, brightly colored and plump pods. Avoid any which are slimy or have black spots. If possible, run a thumb along the pods to make sure they are full.

Like any fresh legume, broad beans begin to lose their flavor and nutrition once they are harvested. Store unpeeled broad beans in the refrigerator for a maximum of 2-3 days. Alternatively, peel the beans twice, then store the small uncooked beans in cold water for 1-2 days or freeze them, then store in an airtight bag for up to 6 months (this method also takes up less real estate in your refrigerator).

Dried broad beans are normally re-hydrated and cooked until soft, then puréed.

Preparing broad beans is simple. Remove the beans from their pod by running your thumb along the seam to dislodge the beans. Plunge the beans in boiling water for one minute, then immediately drop them into cold water. The outer hull can now be removed by gently peeling or squeezing it away. At this stage, broad beans can be eaten raw (if young) or cooked for an additional 2-5 minutes.

Nutritional Info: Broad beans are high in protein and carbohydrates (above the average when compared to other legumes). One negative side effect is favism. This condition mostly affects people of Middle Eastern or African heritage. Consuming undercooked broad beans can cause severe cases of anemia, although this condition is considered rare.

I never make fresh broad beans the main vegetable on the plate because the work in preparing them is simply too much. But these little green jewels are delicious when combined with other small green vegetables that garnish a seasonal spring dish.

3 6
Go back to ingredients
x Thank you for your comment. It will be published after review by the editor.