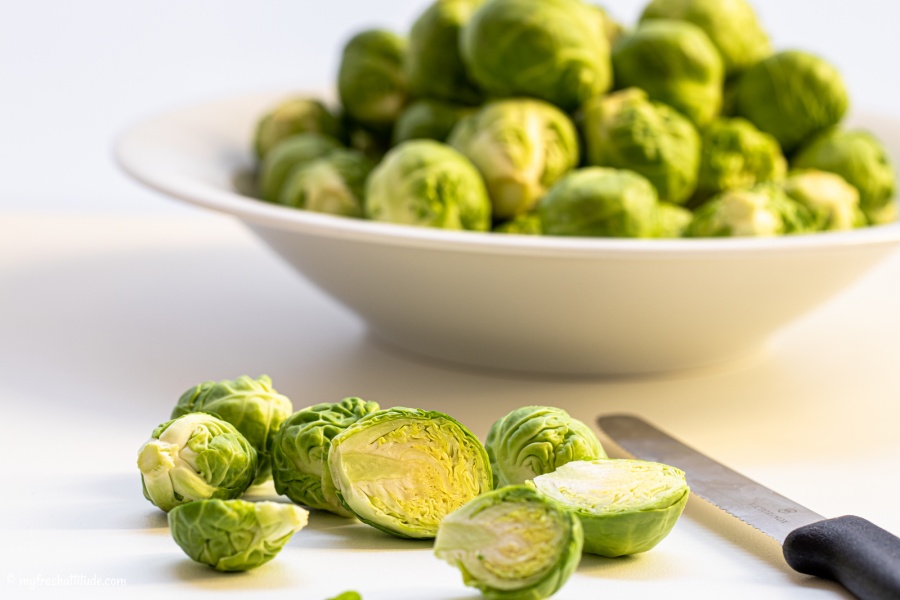 I don’t recall how old I was when I first encountered Brussels sprouts, but I am fairly certain my indoctrination took place during the holiday season. I remember fantasizing I was a giant and the sprouts were full-grown heads of cabbage. A ridiculous fantasy, I know, but to this day I become that giant each time I hold a sprout in my hand and trim away the outer leaves. This makes me smile…and I am sure it makes the sprouts taste much better than what most people think.

But there’s a darker side to my Brussels sprouts memory. This one takes place in a bustling school cafeteria. I see myself waiting in a crowded line as my lunch is slopped into individual compartments of my school tray. I recall hearing a splat as the heavy mashed potatoes encroached upon the meatloaf in the center partition. And then a spoon filled with the greyish-yellow little sprouts spilled into a neighboring corner of the industrial tray. I could see a glistening of fat coating the sprouts. They looked soft and unappealing. I caught a faint whiff of sulfur tickling my nostrils…and I probably sneezed. The apple crumble came next, but it arrived too late. The Brussel sprouts were too invasive and I knew my boyish appetite vanished for the next several hours.

I have thankfully recovered (mostly) from this dark memory. I most-definitely prefer the playful innocence of little me imagining the tiny sprouts as full-grown heads of tasty cabbage. Today, I imagine Brussels sprouts in completely different manner. I dream of crispy strips of cabbage in a spicy salad with just a suggestion of crunchy and aromatic cumin seeds. I can almost sense the smokiness coming from the slightly charred outer leaves of grilled or roasted cabbage. My mind’s eye sees little bright green, halved heads of cabbage glazed with a light touch of Tuscan extra virgin olive oil and just a hint of chili that I know will tickle my throat. The ideas keep coming and seem endless. But like a flashing yellow light at a busy intersection, I approach with caution because I know if I cooked these little cabbages too much, the nightmare image from my childhood school days will reemerge…and I will probably sneeze.

Many food writers have differing opinions on how…and when sprouts first appeared in cookbooks and kitchens. But they generally agree they made a strong impression in the European diet during the 17th and 18th centuries. Most were grown in the region that is called Belgium today, and close to the capital city of Brussels – meaning there isn’t much dispute in where the name comes from.

After an initial period of extreme popularity, sprouts virtually disappeared from markets for about 100 years. They have more recently enjoyed a resurgence in popularity – especially in fine dining restaurants.

Season:  Brussels sprouts are at their peak in flavor and nutrition during the cold months – especially after the first frost of the year. A touch of frost converts some of their starch to sugar, and even young, frost-bitten sprouts turn into delicious morsels when sliced thin and eaten raw – or with just a suggestion of heat.

Selecting and Storing: Look for vivid green sprouts that have no obvious soft spots or yellowing on the leaf edges. The heads should be tight. There should be no sign of perforations in the leaves – this indicates an aphid infestation. The size of sprouts doesn’t really matter. Smaller sprouts taste the same as larger ones, although I would recommend trying to find the same relative size if you plan to cook them whole because similar size sprouts cook evenly.

Preparing and Cooking: Sprouts are simple to prepare. Trim away the outer leaves and remove the bottom part of the stem. Don’t get too aggressive on the stem end because this causes too many leaves to fall off. Place the trimmed sprouts in a large container filled with cold, salted water (the water should taste a bit like the sea) and soak them for 30-60 minutes. The soaking helps to remove any bugs hiding in the leaves and keeps the sprouts crisp.

Keep unwashed and untrimmed sprouts in a loosely opened vegetable bag (preferably not paper or plastic). They keep in the vegetable crisper for 5-7 days. Remember, the longer you keep sprouts in storage, the more intense Sulphur-like aromas will develop and become more pervasive.

Nutritional Info: Sprouts are exceptionally nutritious. They are filled with antioxidants, vitamin K and even omega 3 fatty acids. Some consider sprouts to be the healthiest of all cruciferous vegetables – including kale and broccoli. Brussels sprouts also contain above-average amounts of vitamin C, folate, B6, iron and lots of fiber.

Brussels sprouts are versatile. They can be steamed for about 8-10 minutes, pan-steamed or quickly sautéed for 3-5 minutes or roasted halved or whole for about 15-18 minutes in a 200°C (390°F). Like all members of the cabbage family, they are delicious when paired with spices like cumin, fennel or anise – all which have the additional advantage of helping the digestive system cope with cabbage. Mustard, black pepper and chili peppers all work well to provide a bit of heat. Citrus or vinegars should be used sparingly because acidity will encourage the bitter flavors to shine. And finally, use something salty to balance the natural bitter tendencies of sprouts – salt always works to create a mouth balance against bitter ingredients. 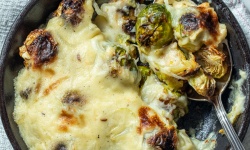 4 0
Go back to ingredients
x Thank you for your comment. It will be published after review by the editor.