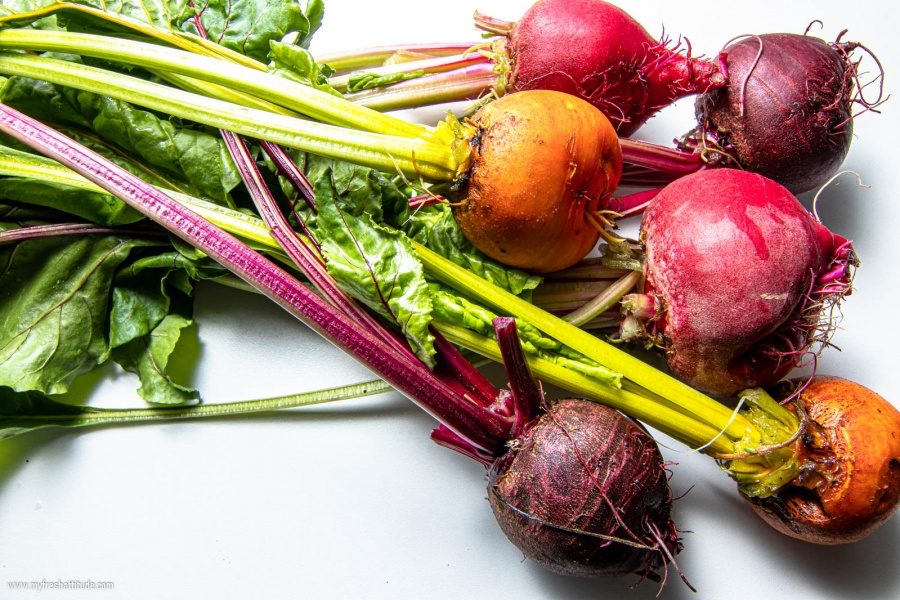 Beets (also called beetroot in many English-speaking countries) are some of the most beautiful vegetables nature has bestowed upon us. They come in an array of rich colors – from red, orange, yellow, and even candy striped.

Many people don’t realize this, but humans have been consuming beets for thousands of years. Originally, people only ate the leaves, before discovering the underground part of specialized varieties. The big fat red one we are most familiar with these days emerged first during the 16th century.

Most food historians agree the beetroot probably originated during prehistoric times in North Africa, the coasts of Asia and also some coastal parts of Europe.

The overall value of beets grew considerably during the 19th century when Europeans discovered the high concentration of sugar and began building the first sugar factories. This discovery came at a time when sugar cane was restricted and highly taxed.

The common beet has a whopping amount of natural sugar – about 3-5% for most varieties, 8% for those fed to animals and up to 20% for cultivated sugar beets – the ones used most often in Europe to produce granulated sugar.

The beet’s intense earthy flavor combined with a rich sweetness can divide a crowd. Some really adore the flavor, but it must also be said, they are not everyone’s favorite…probably because of how they are typically prepared.

Beets combine well with acids, which tend to neutralize the sugars and create a sweet-sour thing that can be very appealing. Seasoning beets with sea salt or sea vegetables high in natural minerals balance the earthy tones and reduces the slight bitterness that some despise.

This is a versatile vegetable. It can be served hot, warm or cold. It is cooked in many ways. It can be enjoyed raw or juiced – even pickled. And the best part according to some – they are highly nutritious!

In addition to the well-known garden varieties, there are varieties called leaf beet (better known as swiss chard), sugar beets and collard greens (known for their spinach-like greens). Collard greens and leaf beet are primarily cultivated for the leaves and stems.

Colored beets (red, orange and yellow) contain a water-soluble pigment that stain other ingredients easily when cooked together. When humans eat red beets, the pigments are usually neutralized by high amounts of stomach acidity and a reaction to iron in the large intestine. Some people will excrete the intact pigment, which can be startling but harmless.

Season: Early beet varieties are available from early summer right through to the beginning of fall. Typical garden beets and sugar beets are fresh during the early fall months.

Selecting and Storing: The size of beetroot is not a good indicator of how they will taste. Generally, large and small beetroot are the same – assuming they are fresh – and large beetroot are easier to handle. I prefer selecting small beetroot for salads and larger ones if I want to create larger chunks to use in a soup, salad or stew.

Look for beets with firm and smooth skins. They should be very hard when you buy them; avoid those that are wrinkled or soft. Any attached greens (a bonus during the early season) should have firm stalks and brightly colored leaves.

Keep the greens. Small and young leaves can be added raw to a salad, while larger leaves can be sautéed like spinach, swiss chard or collard greens.

Fresh beets, especially the early-summer varieties, should be refrigerated. The greens should be removed after purchase because they will rob the root of moisture. Generally, you should use the leaves within 1-2 days and the roots within 5-7 days. Fall varieties can be kept in a cool, dark location for up to one month.

Preparing and Cooking: There are many ways to cook beets. They can be boiled or steamed – simple methods to soften beetroot. Boiling/steaming create milder flavors that emphasize the earthy tones. Roasting beetroot can take a bit longer than boiling or steaming. This method takes advantage of the beetroot’s vast amounts of sugar and creates an intensely flavored sweet-earthy dish. Roasting is also my favorite and preferred method.

It is possible to pressure cook beetroot, microwave them (this preserves the most nutrients) or grill them – the most time consuming, but slightly smokey grilled beetroot is simply marvelous.

Beets are delicious sliced very thin and enjoyed raw. Multi-colored thinly sliced raw beetroot is striking to serve as a salad or like a carpaccio. Of course, beetroot is also excellent juiced – often with ginger, apples and oranges.

To Boil: Bring a large pot of water to a boil. Add a good amount of salt to the boiling water – try to get it to taste a bit like sea water. Put the washed and whole beetroot into the water, cover the pot and turn the heat to medium-low. Simmer the beets until they are soft and easily pierced with a skewer or thin-blade knife…normally, this takes about 30-45 minutes. Drain the beets, cool them slightly and peel while still warm.

To Steam: Organize your steamer to sit about 5-cm (2-inches) above the water. Cover the pot and steamer and bring to a light boil. Once the steam begins to form, add the washed and whole beetroot to the steamer. Cover and cook over steadily simmering water. The beets are cooked when they are soft and easily pierced with a skewer or thin-blade knife…normally, this takes 30-45 minutes. Remove the beets from the steamer insert and cool slightly before peeling them while they are warm. One other important consideration – keep an eye on your water level in the steamer – it’s not really good for your pot when the water dries up!

To Roast: Preheat the oven to 190°C (400°F) with circulating fan. Add a bit more to the oven temperature if you do not have a circulating fan. Wash the beets, leaving a portion of the stem intact. Keep them whole and unpeeled. Rub them in some extra virgin olive oil and wrap individually in aluminum foil (you can also add some herbs, sea salt or other flavoring agents to the packages). Place the wrapped beetroot on a rimmed baking sheet lined with some baking paper (this will help to keep the baking sheet clean in case there of bleeding). Roast about 45-90 minutes – depending on the size and age of your beetroot. Just make sure they are soft and easily pierced with a skewer or thin-blade knife before removing them from the oven. Cool slightly and peel the beetroot while still warm.

Nutritional Info: Beets are anti-inflammatory and contain large amounts of antioxidants – one very good reason to include a lot of beets in your diet. Beets contain rich amounts of Iron and Vitamin B1. Non-organic beets can carry high levels of nitrogen and should be avoided if using raw or as a juice.

When cooking beets, try to keep in mind it is always better to overcook beetroot slightly than to undercook them.

I find it is best to peel beetroot once they are cooked…this minimizes bleeding and loss of nutrients during the cooking phase. Try to peel the beetroot while still warm – wear some gloves or use a towel, which of course will turn color. It is sometimes helpful to peel beetroot in the sink under running water but keep this to a minimum because you also wash away flavor and nutrients.

Make sure to give raw beetroot a good scrub before cooking. Always leave a bit of the stem intact – this helps minimize any bleeding during cooking. 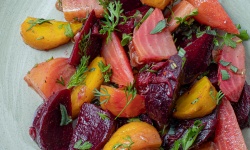 2 2
Go back to ingredients
x Thank you for your comment. It will be published after review by the editor.