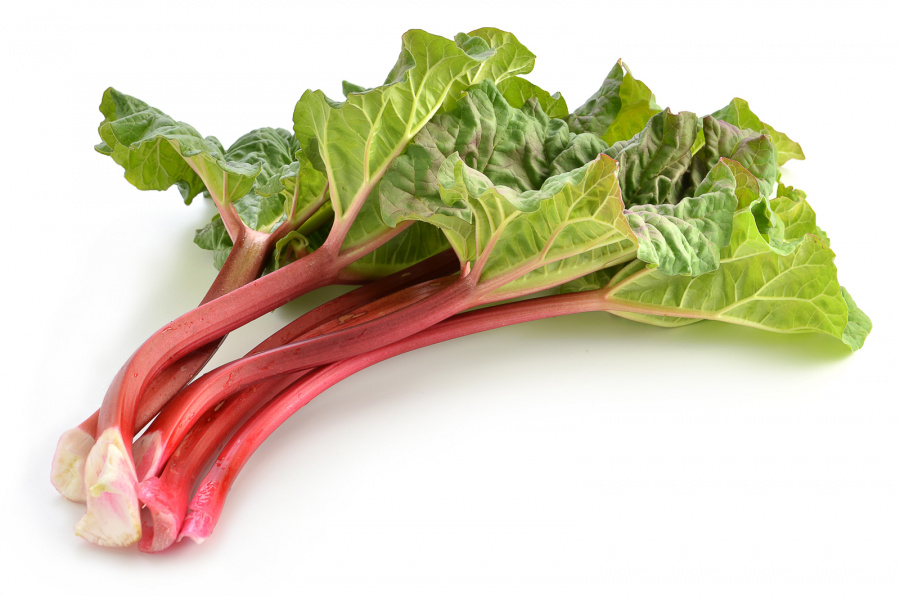 The rhubarb plant is a member of the buckwheat family. Botanically, it is classified as a vegetable – a tart, fibrous vegetable with an edible stalk similar to celery. From a culinary perspective, rhubarb is closely aligned with fruits because it is usually used in pies, compotes and gels. And in earlier times – something like the Shang Dynasty in China (1600-1050 BC) – rhubarb roots were used exclusively for medicinal purposes.

So how does one classify this plant that likes to masquerade as a fruit? In my opinion, it doesn’t matter. I see it as an ingredient I like to use to make delicious spring desserts that have a satisfying sweet-sour vibe.

In today’s world, the stalks are the only edible portion of a modern rhubarb plant. The leaves contain far too much oxalic acid – amounts that would certainly cause severe gastric suffering if too much were consumed. The stalks remain tart, although modern growing techniques have resulted in milder and sweeter stalks. This post-industrial rhubarb plant flourished. And together with an increased sugar supply, a rhubarb boom was born in England during the early- to mid-1900’s, along with the development of many sweet recipes that spread throughout Europe and North America.

I’ve always enjoyed rhubarb whenever I came across it but it was more a casual acquaintance to me instead of a true culinary friend. So, I decided several years ago to take a closer look…and I like what I saw.

I liked the cheeky nature of rhubarb impersonating fruit…but it really surprised me to understand how the tartness of rhubarb brought out the best qualities in other foods. Rhubarb’s healthy dose of acid balanced perfectly with anything sweet. Acids also helped carry aromas through food – exactly like a seasoning. I think this is one reason rhubarb matches well with early season strawberries that are often bland tasting and have underdeveloped aromas and weak acids. Just combine a bit of rhubarb with those same strawberries and suddenly the flavor is transformed into something resembling tasty. I like that too.

Rhubarb is one of the few remaining seasonal ingredients I look forward to enjoying when the season arrives. It’s only available from farmer’s markets about 2 months before it quietly fades away until the following year and re-emerges – just like fruit. Again, I like that.

Rhubarb is not fussy to work with – at least in my experience. It is abundant, easy to clean, simple to prepare and inexpensive. And those are traits I really like.

Season:  Rhubarb is available in some locations throughout the year, thanks to production in a hot house. The optimal time to enjoy fresh, field-grown rhubarb is from mid-spring to the beginning of summer – or late April to mid-June if you’re in the northern hemisphere.

Most farmers or growers of rhubarb have a hard cut-off date of June 21 – the first day of summer in the northern hemisphere. This harvest cut-off date helps the plant regenerate for the next season, plus later season rhubarb builds up increased levels of oxalic acid.

Selecting and Storing: Choose crisp stalks with small fibers and bright colors. If the leaves are still attached, they should not be wilted or have yellow spots.

Rhubarb is perishable after harvesting, so it is often best to consume it as soon as practical. It will hold about 3-5 days in the refrigerator when wrapped in a paper towel and stored loosely in an open plastic bag.

Rhubarb freezes well. Wash and portion, then lay flat on a baking pan to freeze. Store in an airtight freezer bag…or ideally, vacuum-packed.

Preparing and Cooking: The leaves from the stalks should be completely removed. Trim the bottom portion and remove any tough fibers from the stalks by using a small knife to grab the fiber from the top and pulling down to the bottom. Removing fibers is only necessary if the fibers are noticeable. For most preparations, it is a good idea to portion the stalks in 5-cm (2-inch) pieces.

Rhubarb is mostly stewed in a sweetened liquid, although it can be cooked sous-vide or very gently roasted in the oven. Stew gently in small amounts of liquid and for short periods to preserve color and texture – rapid boiling will cause the stalks to turn mushy. Rhubarb is often paired with some or a mix of the following spices: ginger, cardamom, nutmeg, clove and cinnamon. Strong herbs such as bay leaf, thyme and rosemary also work well with rhubarb.

Nutritional Info: Good amounts of vitamins A and C, and a good source of essential minerals.

Rhubarb tends to disintegrate rapidly when cooked; it goes from nearly done to mushy in a matter of seconds. I think it is a good idea to remove rhubarb from the heat just before you think it is completely cooked. Leave it to cool in the cooking liquid and allow the residual heat to complete the cooking process or remove the rhubarb completely from the liquid, cool it slightly while reducing and thickening the cooking liquid, then returning the rhubarb to the liquid as it cools. 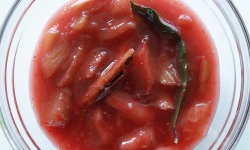 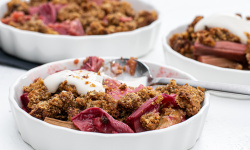 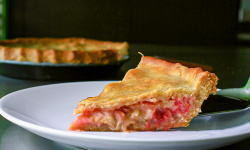 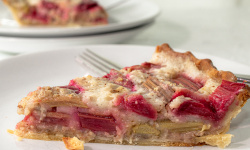 1 0
Go back to ingredients
x Thank you for your comment. It will be published after review by the editor.