Summer squash is beautiful to look at…and it doesn’t matter if it’s in the garden or stored on a supermarket shelf. The deep green…or golden yellow…maybe even striped grayish-green varieties scream summer. Even the shapes are interesting to look at – there are round or saucer-shape varieties – or the strange, crooked neck version so beloved in Italy. Of course, most zucchini are longish, straight and narrow; they look a lot like a cucumber with smooth skin.

But as we all know, looks can be deceiving. And in this case, looks are often disappointing! This beautiful vegetable lacks a big punch of flavor and the interior rapidly turns mushy when overcooked. So, is it a case of the cover being more intriguing than the content…because I sure don’t think it’s pleasing to eat bland mush as an adult?

Top Tips for Getting the Most Out of Zucchini

Summer squash has a mild flavor that seemingly evaporates with the high levels of water in the flesh whenever heat is applied. This often results in a soft and mushy interior. Larger and more mature zucchini are even worse; they tend to be bitter…and a major reason I avoid the larger ones – even if a kind neighbor offers to donate their surplus from the garden.

I’ve developed a few strategies over the years to get the most flavor I can out of zucchini. My methods are all about controlling the cooking time and temperature and making sure I choose the right zucchini.

How to Choose, Store and Prepare Zucchini

Try to select small versions of whatever shape you are after – something about the size of an adult hand for the classic shaped straight zucchini or tennis ball sized for the round ones. You want flesh that is firm without feeling rubbery. Avoid the ones that have nicked or cut skins – easily done because zucchini have sensitive skins.  You should also avoid all summer squash with wrinkled skins – a sure sign of too much age.

Freshly picked zucchini are quite happy hanging out at room temperature for a day or two but it will quickly deteriorate if left out too long. I suggest keeping zucchini refrigerated for several days in an enclosed bag with as little air as possible. Avoid pre-washing then storing. The added water speeds deterioration.

There is no need to peel the skin – in fact, it’s way better if you avoid peeling because a healthy amount of flavor and nutrition is in…or just under the skin. Very young zucchini can be enjoyed raw in a salad – just slice or grate them as thin as possible and enjoy. If cooking, I suggest using high heat methods like sautéing or grilling (BBQ or oven). The fast, high heat allows for some softening and browning on the outside that enhances flavors while preserving the interior from turning soggy.

What’s in a Name?

Is it zucchini, courgette, marrow or summer squash?

The answer is all of the above. Most early American cookbooks refer to this vegetable as zucchini primarily because they were mostly introduced on a wider scale by Italian immigrants. In the UK, the French name courgette is mostly used because the famous British food writer Elizabeth David introduced them to the general public through her popular books on Mediterranean cooking. Previous to WWII, the British public were only aware of the zeppelin-shaped large versions that were called marrows. Today in the UK, the smaller versions are called courgettes and larger swollen and watery versions are called marrows. And of course, all variations despite the name, belong to the general family of summer squash.

What About the Flowers?
Squash flowers are wonderful to eat. There are plenty of recipes out there for battered and deep-fried flowers…or stuffed and baked or steamed flowers. From my perspective, I think cooking takes away any of the mild flavor in these flowers and turns them into a curiosity more than anything else. I prefer using them more like an herb – something to grace the top of a soup as a garnish…or perhaps in a salad or on top of a summer pasta dish. The flowers come away from the stem easy enough by just tearing them from the bottom. I slice the harder green part of the flower thin and the bright yellow part a bit thicker. 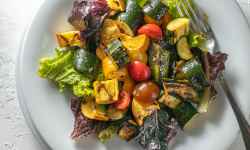 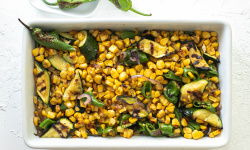 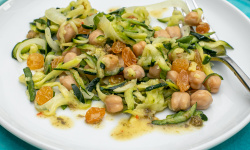 Salted Zucchini with Chickpeas in Agrodolce