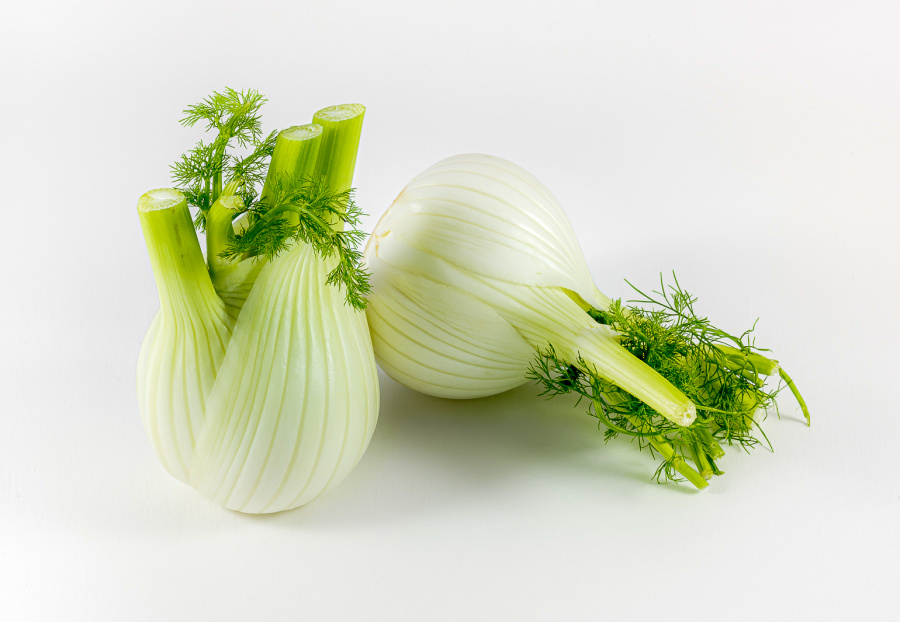 Fennel is not one of those vegetables that I remember tasting the first time. It may have occurred during my experimental days living in the SF Bay Area, when I toe-dipped into one of many creative cooking pools. Or, my first taste of fennel may have happened during an early visit to the Mediterranean region. I simply don’t recall it.

But I do remember one specific time when I bit into a slice of fresh fennel. It happened while I was prepping a salad during one of my first professional chef jobs. I enjoyed the crunch between my

teeth and the juicy flavors that filled my mouth; it was something very similar to anise but milder. Then I remembered my childhood obsession with licorice…with sun…with baseball and without a care in the world. I became a fan of fennel exactly then, and I couldn’t understand why this vegetable wasn’t more popular.

About a year later, I ate a cooked fennel – or more specifically an overcooked braised fennel that tasted lifeless and felt mushy – the fate of most vegetables forced to endure long cooking times. The experience was not pleasant. At that point, I realized fennel has two distinct personalities that divide people: the lively raw version or the mushy cooked version.

Fortunately, I learned how to treat fennel and preserve the fresh subtle-anise flavor without damaging the texture. I use this vegetable liberally in salads, but also in stews and soups. It is one of my standard vegetables – especially when I am trying to create a Mediterranean vibe in one of my dishes.

Get to Know: Fennel is sometimes labeled as ‘sweet anise’ – a misleading name that may cause those who don’t like the flavor of licorice to avoid it. The flavor of fennel, however, is sweeter and more delicate than anise, and when cooked, it becomes lighter and somewhat nutty.

Fennel has a rich history in the culinary world. It has been used by the ancient Romans and Greeks, as well as Egyptians and even found in old Chinese and Indian recipes.

Fennel was revered by the Greeks and the Romans for its medicinal properties. It was used against snake bites, and for women, fennel was recommended to increase mammary gland activity. It was used to strengthen and soothe the stomach and to sharpen the eyes. It was even used to lighten melancholic faces and to kill earwigs. The list of medicinal properties could be continued indefinitely; there is hardly any ailment that could not be treated with fennel.

Season: Spring, late-spring and early summer are the peak times for fresh fennel – although it can appear well into the fall months.  Late season fennel tends to be fibrous and not terribly good for salads or any preparation that is raw or lightly cooked without aggressive trimming. Fennel trimmings at any time of year are excellent in making vegetable broth.

Fresh fennel can be refrigerated for about 5 days. Be sure to remove the greens and most of the stems. The stems and roots should be stored separately and wrapped loosely to preserve freshness.

Preparing and Cooking: The entire fennel plant is edible (the bulb, stalk, greens, seeds and blossoms).

Most recipes refer to the bulb when calling for fennel in a recipe. Trim the root end with a knife to remove the dried part of the stem. Trim away any brown spots or blemishes with a vegetable peeler or knife (or discard the entire outer layer). The fennel bulb can be used in a number of ways: thinly shaved and kept raw for salads, sliced like an onion and sauteed or roasted or cut into thick wedges for grilling, braising or roasting.

Shaving fennel is simple if you have a slicing device like a mandoline to create wafer-thin slices – ideal for raw preparations. Halve the bulb lengthwise, keeping the core intact. Pass the fennel over the slicer in long passes while firmly pressing down. Be careful with the last few passes and protect your hand in some way (hand or finger slices on a mandoline are not fun – trust me I know).

The fibrous stalks can be used in the same manner as celery stalks. They are particularly suited for soups, stews and broths. Fennel stalks can also be used as a bed for other preparations that are roasted.

The feather-like greens look similar to dill. The flavor of the fennel greens has a more pronounced anise flavor, but also more citrus notes. Use it in salads, vinaigrettes, sauces or garnishes.

Nutritional Info: Rich in Vitamins A, C & E, along with good amounts of calcium, phosphorus, and potassium. The volatile oil found in fennel has been shown to reduce inflammation and protect the liver.

The key to drawing out the most flavor in fennel is to go lightly in cooking, unless the fennel is grilled or roasted – use high heat in this style of cooking to create crispy edges. I enjoy fennel thinly sliced and served raw in salads like our Sicilian Orange and Fennel Salad, slightly cooked as in our Spicy Carrot and Fennel Salad, mixed with other vegetables to form a filling (Swiss Capuns) or carefully braised with other vegetables like our Mediterranean Braised Artichokes.

When using fennel raw, soak the slices in ice water for about 20 minutes, then drain and pat dry. This tip will maximize the crunch. 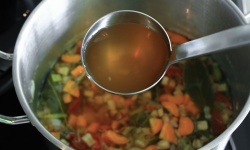 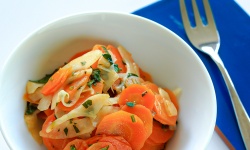 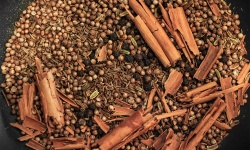 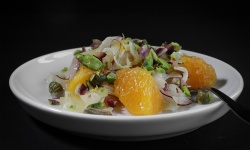 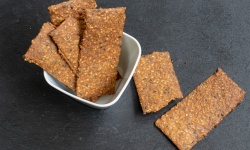 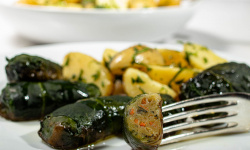 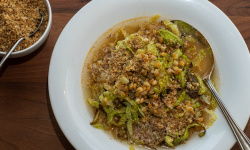