Many people place the common sweet pepper (aka Capsicum) into the ‘it’s-ok’ column of foods they enjoy eating. Some simply can’t tolerate this nightshade vegetable (ok…it’s really a fruit, but mostly used in savory dishes). As for me…well, I probably fit into the ‘it’s-ok’ group of people until recently when I started to consider how many classic recipes I’ve enjoyed from all over the world that include this ingredient.

I thought of how I devoured silky-soft stuffed peppers in Greece that reminded me of something my mother often made. I considered the large amounts of sweet paprika – mostly Hungarian – that fill my spice drawer. I recall staring in amazement at the tidy piles of various pepper pastes throughout the spice market in Istanbul. I daydreamed of that little tapas bar in the heart of Seville Spain that served an amazing non-chilled gazpacho. I imagined sitting in that restaurant in the bustling zone of Jaffa Israel and digging into a morning shakshuka. And then I thought about the first time I enjoyed a ratatouille in the Southern Rhône region of France…my goodness, that was delicious. Then, I was transported to Italy and couldn’t decide where to begin – the pizzas with sweet peppers or the magically spicy peperonata of Southern Italy?

The sweet pepper has impacted many cultures since traveling to the ‘Old World’ from its South American origin a few hundred years ago. Admittedly, the sweet pepper has also affected me in more ways than I knew…I no longer consider this ingredient as just ok – it is an extreme ingredient deserving considerable respect!

Perspective
The sweet pepper belongs to the Western Hemisphere Capsicum family, which includes all types of peppers (except the peppercorn). Sweet peppers lack the chemical compound capsaicin – the pain and heat part in many peppers – and that is precisely why they are called ‘sweet peppers.’

Sweet peppers come in a range of colors, sizes and shapes. They range in color from pale to dark green, yellow, orange, red, purple and dark brown. They can be snack-sized or much larger than a human hand. Some are bell-shaped (often called bell peppers), others conical-shaped.

Flavors are variable and range within a spectrum of sweet on one end and bittersweet on the other end. Generally, the bright colored peppers are sweeter than green or purple variations. Green varieties and those with spots of green in them are on the immature side, which is why their flavors have more bitterness. Peppers will start out green on the vine, then transform as they mature – often moving from green to bright red or orange.

Choosing the right pepper for your recipe will have an impact on how you season the dish (more on this topic in our recent blog posting: How to Taste…A Chef’s Perspective). Most green, purple or light-colored peppers will have a bitter taste and require something salty to balance the flavors (salt, capers, miso, etc.). The brightly colored peppers will appear sweet in recipes, especially if they are roasted. Use acids liberally in these recipes to create balance (lemons, vinegars, pomegranate syrup, tamarind, etc.).

Season
Most places offer sweet peppers throughout the year, which means you can nearly always find them for your cooking. Look to purchase sweet peppers during the summer and early fall months to take advantage of vine-ripened peppers with minimal processing and travel.

Shopping Tips
Look for firm peppers with richly colored, shiny skin. They should be heavy for their size, but not rock hard. A gentle press with your finger should feel a bit like a firm sponge. Avoid peppers if they are limp, shriveled or have soft and bruised spots. Older peppers will dehydrate quickly and have wrinkles on their skin.

Many peppers are cultivated in greenhouses in a soil-less environment. They are often sprayed with a lot of pesticides that endanger workers and penetrate the skin of the fruit, making these sweet peppers difficult to clean and eliminate pesticide residue. Choosing organic sweet peppers is a wise decision!

Mass-produced peppers are generally weak in flavor and appear far more bitter than something grown on a local farm. These peppers can be difficult to digest for many people.

It is best to keep whole peppers refrigerated in a mesh-like bag for 3-5 days. Peppers tend to dehydrate rapidly, so you can extend their life slightly by adding a moist towel or paper towel to the bag.  Cooked peppers should be refrigerated for no more than 3 days before consumed.

You can artificially ripen a slightly under ripe sweet pepper by leaving it at room temperature for a day or two. This will help develop some of the bitter elements and increase some of the sugar levels, but never to the point of a truly mature and ripe pepper.

Cooking Tips
Sweet peppers can be cooked in a variety of ways: steamed, sautéed, grilled, roasted, stuffed & baked. They are delicious when enjoyed raw in salads or with dips…but just make sure to use a brighter colored pepper unless you enjoy bitter tastes and slight stomach discomfort.

Preparing a sweet pepper is simple and can be done using just a simple paring knife (that’s a small knife – mine is with a serrated edge). To cut peppers into various shapes and sizes, start by cutting the pepper in half lengthwise. Open up the pepper and remove the core and all loose seeds. Place the pepper skin side facing down on a cutting surface and simply chop or slice the pepper into whatever size or shape you want. Peppers can be cut horizontally into rings or left whole for stuffed peppers. The pulpy white inner cavity of the sweet pepper is rich in flavonoids and can be eaten, even though some people have a personal preference for removing this section.

Many recipes call for a charred pepper, which basically means you want to apply high heat to the pepper and create blistering and blackening of the skin, which is easily removed from the juicy interior. The purpose of this procedure is to heighten the pepper’s sweet characteristics and provide a slight smoky taste. You can accomplish this task in several different ways: using an open flame from a gas stove or blow torch, on a grill, on top of your stove (usually in a cast iron pan) or in a very hot oven – usually with heat coming from the top burner. You can char peppers whole, which is how most people do it if they have a flame source.

Nutritional Info
The sweet pepper is one of the most nutritious vegetables. They are an excellent source of vitamin C – up to 10 times more than lemons – and vitamin A, along with calcium, phosphorous, iron, thiamine, riboflavin and niacin.

Green and yellow pepper varieties have high amounts of lutein, which help oxidative damage in the eye – excellent news if you want to protect your eyesight!

When using the oven to char peppers, I find it useful to cut the pepper in half lengthwise and remove all the seeds and core, then place the pepper skin side up on a baking tray lined with baking paper. Make sure the oven is preheated to 250°C (450°F) using just the top heat. Place the tray with the peppers as close to the heat source as possible and roast for 8-12 minutes – check them frequently and remove the peppers when the skin is blistered and black. Cool slightly and gently lift off the skins. 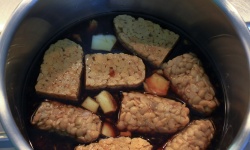 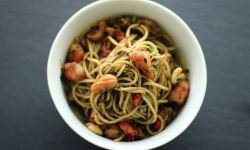 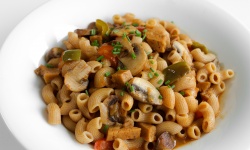 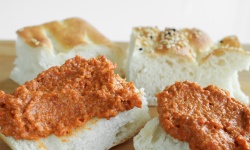 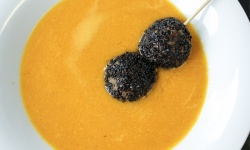 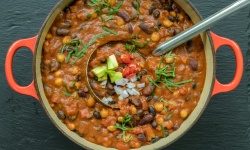 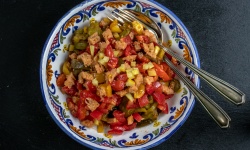 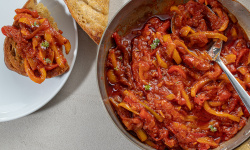